Given an asset’s price at a pair of times (e.g., the price of APPL at 9:00am and 9:30am on a particular trading day), one may be interested in interpolating the price between these times. Of course, while it is possible to simply interpolate linearly between these times, this approach does not generate a distribution of possible realizations which may be needed for statistical analyses.

To simulate the bridge, pick a point $s$ in the interval $(t,T)$ and use the above distributional characterization to sample $B_s$. Now, the values of $B$ on the mesh $\{t,s,T\}$ are known.

To further refine this mesh, pick a new point $r$ that is in either $(t,s)$ or $(s,T)$. Depending on which interval is picked, a Brownian bridge with the endpoints $(B_t, B_s)$ or $(B_s, B_T)$ can be used to sample $B_r$. This procedure can be repeated as many times as necessary to obtain as fine a mesh as desired.

Interpolating the NASDAQ in 2017

Remark. Below, the price of a symbol on a particular trading day is defined to be the midpoint between its open and close price.

Disclaimer. The code below is optimized for readability, not speed. 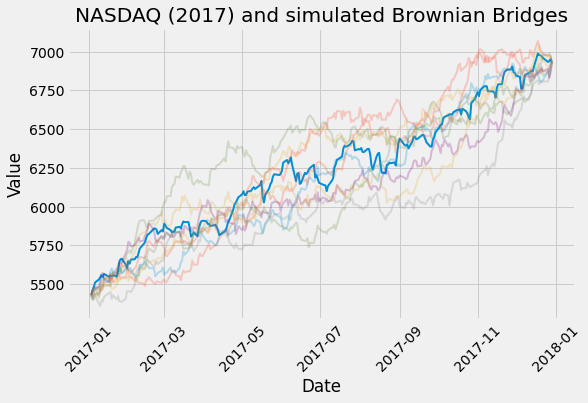 September 27, 2020
This website is powered by Jekyll with a modified Hitchens theme.